In 2017, my reality was closing my airways. There was so much in transition, and I was in full sprint to keep up. I just needed to make it to the end, to where I could breathe. So, I planned Mission Open Sky.

It all started in church one Sunday morning in the summer of 2016. The pastor started his sermon with the story of how he and his friends hiked the ‘Pemi Loop’ in one day. It was the first I ever heard of the Pemigewasset (Pemi) Loop: 31 miles, eight 4,000+ foot peaks, and 9,000 - 10,000 feet total elevation gain. Completing the Pemi Loop in one day immediately went on my list of potential adventures. But the next day, my potential-adventure list was put in storage as my life started to change and swell in every way …

I quit my job in publishing to pursue a career in fitness. I moved out of the apartment I shared with my then boyfriend and into a closet-sized room I found on Craigslist. Shortly after I moved, we broke up. (Saw that coming.) I became vegan. (Because why not change that too?) Then 5 months later, I moved again. Although I received a major upgrade in space, the home I moved into was under renovation. So, most days, I couldn’t be there, and during the hottest months of summer, I had no air conditioning. BUT I did get a new layer of saw dust each day and the sweet aroma of paint and wood stain. (Yay.) About 3 months later, I took on a leadership position at church. And 2 months after that, I started yoga teacher training. All of this while trying to make ends meet as I struggled to gain ground in the fitness industry.

My days were so full, I had time for just 3-5 hours of sleep each night. And so, every Thursday evening, like a sadistic ritual, I would cry on my bottom step for about 20 minutes before heading up to bed. (Why Thursday? I honestly have no clue.) I was breaking. I realized I needed a beacon, something calling me onward. I needed an adventure. I needed mountaintops. And that’s when the Pemi Loop came back to me.

So, I planned Mission Open Sky.

I started training, fitting it into my schedule like rain into a bucket of sand. I traded sleep for miles, accumulating them as though I were training for a marathon. I traded sit-down meals for walking lunges, endless walking lunges. I knew I needed trail miles and a strength program, but those would’ve made my bucket overflow. So, I stuck with my miles and lunges. For 3 months, I survived on adrenaline and open sky daydreams.

Three nights before Mission Open Sky, I went out with friends to celebrate our graduation from yoga teacher training. There were drinks. SO many drinks. The next morning was ROUGH. (I hadn’t been that hungover since college.) Between hesitant sips of water and the occasional cheek smush against a cold wall, I readied my pack for the Pemi Loop. I put myself on a train to my dad’s house, where my car lives. And the next morning, after making a healthy supply of PBJs, I set out to drive the 10 hours to Hancock Campground.

Once I arrived at my tentsite, I set up camp and fueled my body for the next day’s adventure. I then readied my running pack, laid out my clothes, and attempted to sleep. Every hour, I woke up, checking the time. ‘Darnit! Still not yet.’ After doing this for about 6 hours, I had had enough. I needed to just get on with it.

For 3 months, I survived on adrenaline and open sky daydreams.

So, on August 22, 2017, at 2:30 in the morning, under the cover of countless stars, I laced up my Altra Superiors, clipped on my Nathan hydration pack, and slipped into the Pemi Wilderness in New Hampshire’s White Mountain National Park. I wasn’t coming out until I bagged all eight 4,000+ foot peaks of the Pemi Loop. Mission Open Sky had been activated.

As I ran along the Lincoln Woods Trail, I decided to go clockwise, which meant my first peak would be Mount Flume. I was able to keep running for the first 6 miles. But then the climb got steeper and my run got slower. As the singletrack turned to wooden and stone stairs, my run became a hike. The night slowed time, making the climb go on forever. But as I stepped through a line of evergreens, my heart burst open. I had made it to the top! And there was just too much sky for me to hold. Standing on the edge of Mount Flume with nothing but stars and darkness before me, I switched off my headlamp and allowed the sky to consume me. Motionless, I breathed in the magnitude until the wind chilled my bones.

Just over a mile later, I was approaching the top of Mount Liberty, the second peak. The night sky was starting to look more gray than black but remained spattered with more stars than you could count in your lifetime. After summiting Mount Liberty, I checked my map for water, because at this point, I had run dry. My Nathan hydration pack holds 1.8L, and I had NOT prepared a hydration plan aside from carrying water treatment pills and hoping there would be a stream. (And, this might sound crazy, but hydration is important.) Fortunately, the map showed “Liberty Springs Tentsite” just a quarter mile off trail.

I didn’t want to miss the sunrise, so I quickly followed the trail down toward the tentsite and passed through the entire camping area, exchanging ‘good mornings’ with the waking campers. After coming to a dead end, I asked a camper about the spring and he pointed me in the right direction. The spring was more a spitting rock. But it was the most beautiful 'spit' my parched soul had ever seen. I held my hydration bladder underneath and waited … and waited … and waited. Finally, the bladder was filled, back in my pack, and I was making my way back up the trail to catch the last bit of sunrise.

I watched the sun's lazy climb as I approached the summit of Little Haystack (which isn't counted as a 4,000+ footer because it's just 200 feet above the lowest point on the ridge from Lincoln). The colors of the sun’s rays breaking through the atmosphere became more intense with each step. Finally, I just stood still. I sucked on a Nature Nate's honey packet and ate half of a PBJ as I watched the sky stretch into day. The beauty was so great it almost felt forbidden.

…there was just too much open sky for me to hold.

Next up were Mount Lincoln and Mount Lafayette, the third and fourth 4,000+ footers. Between peaks, there was a trail sign mentioning a spring. Since I was low on water again and wasn’t sure if I would come across more, I took the trail down to the spring where I rested to refill and to eat the other half of my first PBJ. Although my sporadic running had become more of a steady hike because of all the rocks, my spirits were high. The stress of my life transitions slipped away as I ate up peak after peak of open sky.

At the top of Mount Garfield, the fifth 4,000+ footer, there was a cabin. I don’t know how the workers get up there and how they have running water, but it was a nice spot to sit for a bit, refill my hydration pack for the last time, and eat another PBJ. Clouds rolled in, threatening rain. Two men sitting outside the cabin told me that it was supposed to storm that night, and suggested I shorten my route by taking another trail back down rather than continuing up South Twin Mountain. But I was on a mission.

I wasn’t coming out until I bagged all eight 4,000+ foot peaks of the Pemi Loop.

So, I hopped to it, starting my ascent up my sixth peak, South Twin. Oh, South Twin Mountain, you almost killed me. I wasn’t moving quickly, but my heart was beating outside of my chest. My PBJ was visiting my throat, leaving behind the taste of orange marmalade (that I was forced to use because my dad didn’t have any proper jam at his house). And my mind started playing games: Could I call in a helicopter rescue? Nah, that’d be too embarrassing. Could I just roll myself down the mountain? Or maybe I could take a quick nap? I had packed an emergency bivy after all.

But then I looked up. And there it was. The top! I tore into the open, ready to take in even more open sky, but instead, I was smacked in the face with the stench of Appalachian Trail through hikers (the aroma of perseverance) and disappointed by the walls and ceiling of a cloud. The tired was pressing into my skull and the sky was becoming more menacing. So, I moved on. I left the hordes of SOBOs and NOBOs and turned my back on the cloud.

Mount Guyot (not considered a 4,000+ footer for the same reason as Little Haystack), Mount Bond, and Bondcliff Mountain, my last ascents, were quick and painless. I was focused on getting out of there before the storm came which would make the rocky terrain impossible.

I just needed to make it to the end…

As I started my last descent, I came upon a section of the trail that seemed more a narrow waterfall. And I slipped. As I launched forward, my left foot fell into a hole, getting my shin pinned between two rocks. Somehow, my right hand caught hold of a small tree and my right foot found some solid ground. Fear blew away my tired. As my senses came back to me, I assessed. Luckily, I was whole. I had nothing more than a scrape on my left shin to show a spectacular slip had occurred. The jolt of the fall gave me the energy to quickly and alertly make my way down to the flat Wilderness Trail. My Gumby legs managed a ‘yog’ for the last 4 trail miles. Once I made it to the highway, my ‘yog’ became a hobble, and with a victorious smile, I hobbled the last half mile back to my tentsite.

Once back at camp, I hopped in the car and drove into town for cell service so I could let people know I was alive. Then I went back to my tentsite, used up an entire packet of body wipes, ate some dinner, and slipped into my tent just as the rain started. It poured and thundered that night, making sleep impossible. Once morning came, I started breaking down the tent. Originally, I planned on stringing up my hammock to sleep the day away. But I had accomplished what I came to do.

Mission Open Sky was a success.

It was now time for a real shower and a real bed. Thank you, Pemi Loop, for giving me space to breathe. ❤ 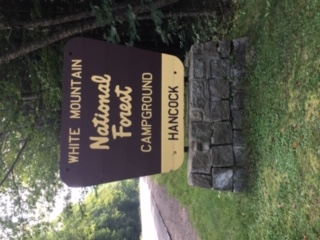 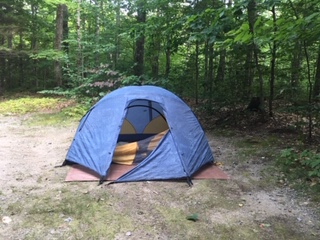 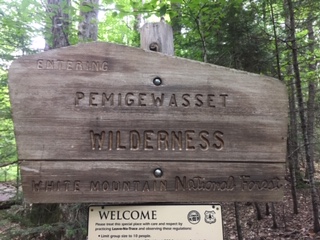 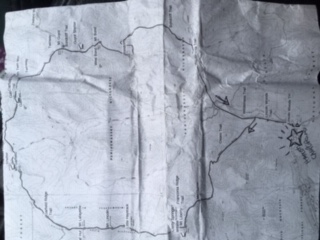 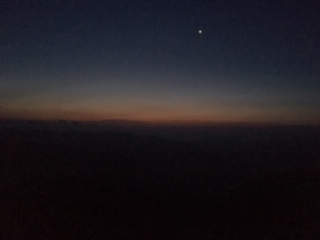 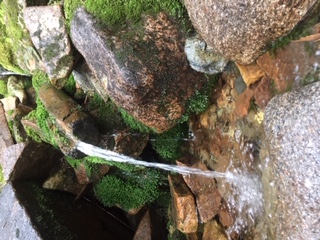 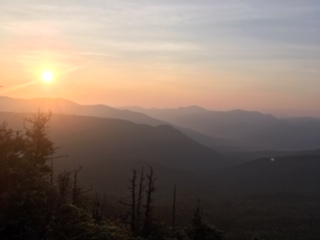 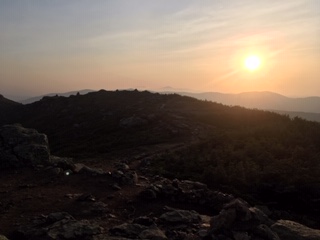 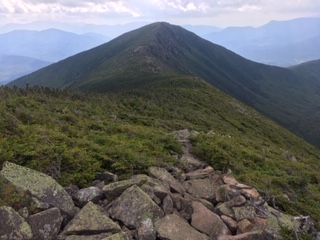 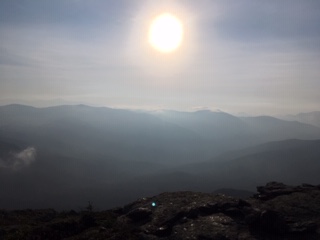 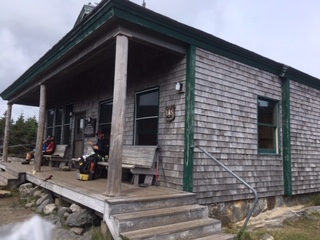